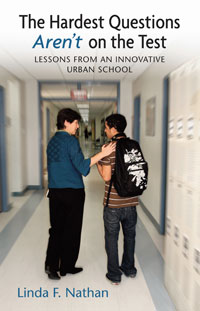 Lessons from an Innovative Urban School

A dynamic high school principal on schools that matter, teachers who inspire, and students who achieve

The Boston Arts Academy comprises an ethnically and socioeconomically diverse student body, yet 94 percent of its graduates are accepted to college. Compare this with the average urban district rate of 50 percent. How do they do it? This remarkable success, writes Principal Linda Nathan, is in large part due to asking the right questions-questions all schools can consider, such as:

With engaging honesty, Nathan gives readers a ring-side seat as faculty, parents, and the students themselves grapple with these questions, attempt to implement solutions, and evaluate the outcomes. Stories that are inspirational as well as heartbreaking reveal the missteps and failures-as well as the successes.

Nathan doesn’t claim to have all the answers, but seeks to share her insights on schools that matter, teachers who inspire, and students who achieve.

Larry Lucchino, President/Chief Executive Officer of the Boston Red Sox
“Linda Nathan has written a remarkable book. Boston Arts Academy is an urban public high school just across the street from Fenway Park. So I get to see first hand, young people from every neighborhood in the city who greatly benefit from the approaches so clearly espoused by this innovative educator. With over 90% of graduates consistently going on to college (many the first in their families to do so), the results speak for themselves. ”

Howard Gardner, Author of Multiple Intelligences: New Horizons in Theory and Practice
“Using rich and vivid examples, presented with passion and candor, Linda Nathan shows what it really means to go ‘back to basics’ in American urban education.”

Carol R. Johnson, Superintendent, Boston Public Schools
“With heart, compassion, and a magnifying glass, Linda Nathan takes us into the world of an urban high school, with its daily trials, defeats, joys, and victories. By broadening the lessons learned from the successful Boston Arts Academy, she is providing a service to educators everywhere. Everything from the achievement gap to parent elections to professional learning communities gets examined. This book does not shy away from raising questions, encouraging self-reflection, and ultimately opening minds – all while drawing on the power of the arts to engage, inspire, and achieve greatness.”

Keith Lockhart, Conductor, Boston Pops Orchestra
“Linda Nathan takes a courageous look at our deteriorating educational system, and offers innovative solutions.  Our “teaching for the test” system, designed to even the playing field for our young people, has instead so often marginalized those who don’t fit into the “multiple choice” scenario.  Linda makes a case for reaching each student on his or her own terms, using an arts-based curriculum that unlocks the creative thinking and capacity for self-expression that such an approach nurture.  The results are thought-provoking and inspiring.”

Deborah Meier, Educator and Author of The Power of Their Ideas
“Linda Nathan’s wonderful account of piloting the Boston Arts Academy is personal, anecdotal, and yet focused on the critical Big Questions. Through stories of how these questions play out in hallways and classrooms, Nathan articulates a vision of how urban schools can flourish.  For one thing, Nathan makes it so clear why having a team of teachers over time makes such a difference and builds an adult culture that kids so badly need.  These are adults one wants kids to keep company with for years. I want to send this book to everyone who should be speaking up about new directions in public education.

William Ayers, Author of To Teach a Kind and Just Parent
“Linda Nathan begins with an invitation and a question: Come in, she says, poke around in the classrooms, the studios, the cafeteria, and the hallways. There’s dazzling and surprising stuff to see.

Now ask yourself, if you could start from scratch, if you could do any wild or crazy thing your imagination suggests, what kind of school would you invent for our children?

It’s a bold and propulsive and liberating question—so unlike the tepid and anemic reform proposals cycling with tedious regularity through the public schools—and it’s a question that has powered the work of the Boston Arts Academy for over a decade.

We often hear ourselves saying that we want kids to learn to question, or that we want to raise up generations of critical thinkers, but we ourselves rarely practice the art of serious and sustained critical thinking in regard to our own established enterprises, and never in front of the kids. Linda Nathan and her remarkable colleagues do, and along the way provide argument and evidence, theory and action plan, utopian hope and practical road map to the necessary project of re-inventing America’s schools.”

Michael Thompson, Author
“This fascinating book takes you inside the mind of a uniquely gifted urban school leader and reveals the secrets that help her propel her students toward college: community, transparency, a profound understanding of adolescents and, especially,  moral courage.    Linda Nathan tackles all the painful questions that bedevil every urban educator: the racial achievement gap, high-stakes testing, theft in a school community, conflict with parents.  Reading “The Hardest Questions…” is like shadowing a principal for a year.  It leaves the reader in awe of Linda Nathan’s abilities and grateful for her moral clarity.  I recommend it to every teacher or administrator who wants to make a difference in the lives of inner-city children.”